A visit to Skookum Farmstead

Here is another one from the archives that I wrote a couple weeks ago and haven't had a chance to post. Just for a quick update on our progress we are currently passing through Hailey Idaho (about mile 3500) where they are battling one of the largest wildfires currently burning in the country. It's a very strange and somewhat apocalyptic scene. We are safe and hopefully headed away from the smoke toward our next farm stay. We will have more to post on all of that soon, but first lets go back to a happier and less smokey place; the Skookum Farmstead. 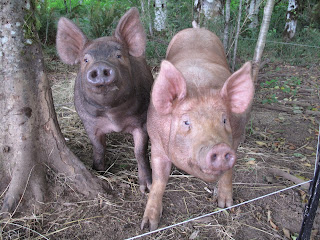 Inspiration and affirmation are two words that come to mind when thinking about our visit to the Skookum farmstead in the little Skokomish valley just north of Olympia, Washington. Inspiring because our new friends Jon and Christy have followed their aspirations and are in the process of realizing their dream of managing a small farmstead the benefits of good homegrown food and hopefully a small supplemental income in the future. Affirming because in many ways Jon, Christy and their three wonderful daughters are pursuing a very similar goal to our own, and they are making good progress. 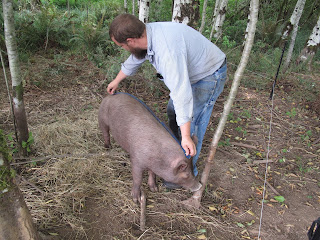 When we first arrived at their property, Jon eagerly waved us through the gate and into a large green pasture. Jon’s warmth was immediately evident as he welcomed us to his farmstead in progress.  A large man with soft blue eyes Jon already fits the part of hog farmer perfectly with a long blond beard worn in the traditional Amish style. He showed Heidi and Me around the property all the while letting his excitement wash over us. One gets the sense that when Jon gets an idea in his head, he pursues it with vigor, fervently researching and inquiring on the topic.  Some might call it obsession. I call it awesome.

Jon and his family were first introduced to leading a more self-sufficient lifestyle when a local organization called GRUB (Garden Raised Bounty) helped them to construct three small raised bed gardens. Jon now holds a seat on the board of GRUB, which strives to encourage local agriculture as well as local involvement especially from the area youth.  From those first garden beds Jon and his family grew a decent crop of food and a new interest in sustainable, local agriculture.  The next adventure was raising a flock of twenty-five chickens for meat, which with the help of a neighbor expanded to forty in the following years. 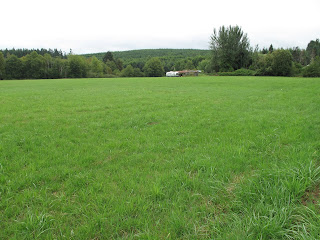 The next chapter is just now beginning with the purchase of this beautiful 40-acre property, which was a collaborative effort between Jon’s family and some close friends who live in Seattle. The land consists of roughly nine acres of fertile pasture, a small wild orchard, two beaver ponds surrounded by wetland and a wooded hillside. Since signing the papers in October Jon and His partner Casey have drilled a well and set up a fenced area for five very happy pigs.  The pigs are a rare heritage breed called Tamworths and are valued for their excellent foraging abilities and lean meat. 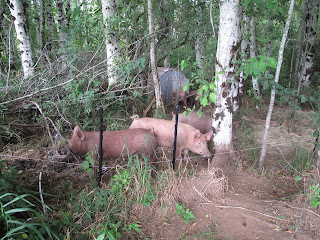 Jon’s vision for the property is intentionally vague at this point. He views his family as tender’s of the land more than farmers. For that reason he is spending a lot of time getting a feel for the property and researching various avenues that would best suit it.  He has plenty of ideas about resurrecting and expanding the current orchard, acquiring more animals to graze the pasture (cows, sheep or goats) and growing produce especially garlic, potatoes and blueberries. The goal is to find the best balance with the land that will produce good food for the family primarily and hopefully some additional income as well. Jon also views the property as an opportunity for hands on learning. Hands-on workshops are one example of what the future may hold for the Skookum Farmstead. 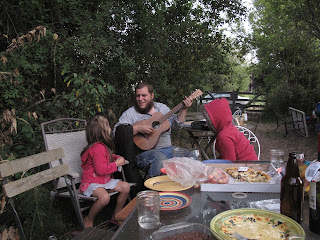 Our day on the farm concluded with some fine al fresco dining around picnic tables near the pond. Jon’s wife Christy arrived with their three lovely daughters. We shared stories, pizza, laughter and even some live entertainment with singing and guitar picking from the family band. At one point during our conversation Jon had mentioned that he hoped that the farmstead would answer the question “what does it mean to be successful?” After an afternoon like the one we had, I think that the answers are already rolling in.

Check out the progress at Skookum Farmstead by visiting their farmstead blog.
at 3:26 PM

We had such a great time with you guys and wish you well on your journey! Meeting kindred sprits is a joy.
Peace,
Jon, Casey, and families