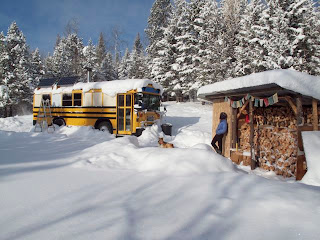 Our attraction to living a mobile-life on our school bus came in large part from our desire to explore homesteading. I will talk more about that a little later, but first let's try and pin down where homesteading comes from and what it means today.
Homestead is a word that is once again gaining popularity.  The term originates from the first US Federal Homestead Act created in 1862 under President Lincoln which allowed pioneers to claim land and set up home sites at little or no cost. The idea of homesteading was later embraced by the Back-to-the-land movement of the 1960's and 1970's. This faction was led by individuals and groups of people who were feeling discontented by certain aspects of city life. They left their urban areas seeking to live closer to nature in a more self-sufficient way while embracing the tools and farming techniques of the original homesteaders. Today, we are witnessing another rebirth of homesteading. The definition is a bit harder to pin down this time as it covers many different lifestyles in many different settings. Urban Homesteading, for example, brings agriculture and self-sufficiency back to the cities. Rural homesteading today often incorporates modern technologies such as solar, wind or hydro-electric power generation. There is a common thread among them all however, which is a movement in the direction of self-reliance. In other words, living in a manner that make you less dependent on our societies infrastructure and more dependent on your own knowledge and skills.

On the premise that homesteading is a flexible term, I would like to tell you what it means to us. For me, homesteading aspirations have been in the works since before I had any idea what they were. As a small child (as far back as I can remember really) I recall trips to visit my aunt and uncle's house in Maine. Trips to see Elaine and David were always highly anticipated because they were like taking a trip back in time. Carved out of the dense woods in rural Maine, the property had been cleared enough to build a small pentagonal house, a cabin which served as the kid's room, a shed and out-house, a chicken coop, an orchard and a garden. Although I don't remember the lack of electricity or indoor plumbing, they were not there in the beginning. I do, however, remember some relics of that time. There was a working hand pump which drew clean drinking water from the underground spring.  Spillover from the spring pooled into a small pond that begged countless hours of frog catching. Inside, sitting stoutly near the back edge of the softly lit one-room home, was a wood-fired cook stove kindly sharing its warmth and emitting aromatic clouds from the home-grown feast within. For several years Elaine and David raised a flock of roosters from chicks. When they had reached maturity, my family would load up the mini van and make the pilgrimage from Vermont for the annual chicken slaughter. Although at the time I wanted nothing to do with the carnage, acknowledging the process and, even more so, tasting the incredible flavor of one of those roasted birds had a lasting impression on me.

Fast forward twenty years or so. I am living in Portland Oregon with Heidi, my girlfriend since collage and soon to be wife. She's working on getting through grad school and I am just plain working. At this time we were both thinking a lot about our future together. Portland had been growing exponentially (and still is) as one of the nations leaders in the farm to table movement. Farmers markets were easily accessible and reasonably priced. Restaurants were featuring menus overflowing with locally grown veggies and high quality meats from small farms just outside of the city limits. Stores were beginning to spring up that catered specifically to the "Urban Homesteader". There was a buzz around town and it all came back to the glorious piles of locally grown, vine ripened, feel good food. If there is one thing to be said about Heidi and me, it is that the two of us, unconditionally and with a fervent passion, love good food. Portland opened us up to a new world of foodie culture. We had always known that food made from scratch was better and that food from the garden was best. We were both fortunate to have families that supported both. We  pursued these endeavors by gardening and expanding our cooking skills. The results were delicious. More than anything though, we enjoyed the satisfaction of doing things for ourselves. I think that the epiphany came with our first subscription to Mother Earth News. Paging through each issue of a magazine that caterers specifically to modern homesteaders, it felt like every article was written for us. We wanted to try it all!

So we knew we wanted to pursue homesteading in some form, but where and more importantly how?  Enter the Mobile Homestead. We know that one day we would like to put our roots down (both literally and figuratively) in a more permanent way. We'd like to have some land to invest in and work with. A place to grow a family. We aren't ready for those things though. There is so much to learn first. There is money to save. There is the little detail of finding the right place with all of the right elements. So why not travel around? This was our inspiration to live on a school bus (Learn more here). Why not learn from those who are already doing it and simultaneously surveying different kinds of land and communities along the way? This is exactly what we aim to do. While we are living this mobile life we want to practice our new skills and live as close to our ideals as possible. We can't easily have livestock or plan on tilling the same garden every season while we are on the road.  Nonetheless, we can help others with their morning chores, plantings and harvests along the way. There are also loads of homestead skills we can practice on the bus. Already we make all of our own bread and yogurt, brew our own beer, cut fire wood, preserve and store local seasonal foods and maintain off grid systems. This past summer we were able to grow the biggest garden we have ever attempted on borrowed land and raise a small flock of chickens for meat. Last winter we learned the ins and outs of raising goats for fiber, meat and milk. Every place we park is a new opportunity.

Of course there are multiple blog posts waiting within all of these topics. For now let's just leave it at this. This is where we came from and this is where we're headed.


Some related sites to explore:

excellent post. informative and optimistic. favorite sentence has to be "Spillover from the spring pooled into a small pond that begged countless hours of frog catching."
TAKE ME THERE! no really.

also, check that bread out!